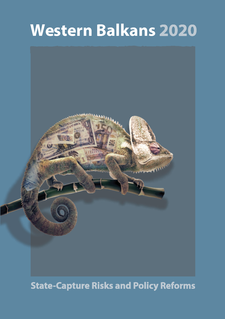 SELDI’s Regional Anti-corruption Report presents the civil society’s assessment of the regulatory and institutional factors enabling corruption in the Western Balkans region and emphasises some of the priority policy issues. SELDI’s monitoring tools provide data on the changes in the actual proliferation of two types of corruption – administrative corruption (bribery), which affects individuals and businesses, and state capture (grand corruption) affecting the functioning of democratic institutions and the government. With respect to the latter, SELDI’s State Capture Assessment Diagnostics (SCAD) tool reveals the presence of strong environmental enablers such as ineffective public organisations which lack integrity, impartiality and robust anti-corruption protocols. It also shows symptoms of business state-capture pressure, i.e. monopolisation happening at national, sectoral or institutional level. The energy is among the risk sectors, due to its high levels of concentration, inefficient corporate governance structures of state-owned enterprises and lack of adequate regulatory oversight. Furthermore, SELDI’s Corruption Monitoring System (CMS) shows that the acceptability of corruption remains relatively high in the region, while citizens do not trust the governments’ ability or willingness to tackle the problem.

The public procurements are an area of particular concern. SELDI’s assessment highlights that tenders are often designed to favour specific bidders, there is a poor compliance oversight, overuse of negotiated procedures, and a large number of tenders with only one bidder. The judiciary also faces several deficiencies: overlap of competences, lack of resources, and influence of the legislative and executive branches in the selection and promotion of judges and prosecutors. The authors underline that releasing the governance from the state capture grip can only be achieved by an alliance of reform-minded policy makers, civil society and international partners. The EU in particular would need to be more active in its political engagement with the Western Balkans, providing them with a clear perspective for the future. Stronger engagement would, however, need to ensure that the benefits of closer economic integration with the Union do not accrue exclusively to a small clique of privileged oligarchs. The overall process should also neutralise the harmful effects of authoritarian influence in the region.

Anticorruption Reforms in the Western Balkans: Looking Back at the Next Decade
Shadow Power: Corruption and Hidden Economy in Southeast Europe
SELDI Regional Conference on Good Governance and Anti-corruption Policy Challenges
Back to list
Subscribe to our newsletter
Related