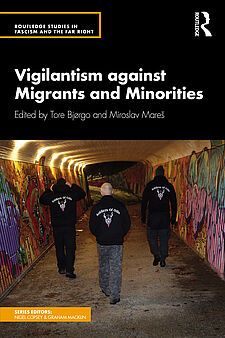 The edited volume "Vigilantism against Migrants and Minorities" traces the rise of far right vigilante movements – some who have been involved in serious violence against minorities, migrants and other vulnerable groups in society, whereas other vigilantes are intimidating but avoid using violence. Written by an international team of contributors, the book features case studies from Western Europe, Eastern Europe, North America, and Asia. This is a groundbreaking volume which will be of particular interest to scholars with an interest in the extreme right, social movements, political violence, policing and criminology.

Тhe chapter “Vigilantism against ethnic minorities and migrants in Bulgaria”, by Nadya Stoynova and Rositsa Dzhekova, analyses the rise of various formations in the country, which is located on the “Balkan migration route” and has significant Roma minority. This migration route provides the reason for the most recent manifestation of vigilantism in the country, namely anti-migrant patrols and arrests at the Bulgarian-Turkish border. Nevertheless, ad-hoc and less organized manifestations of vigilantism, predominantly against the Roma, have been observed prior to the migrant crisis. The wider political context is crucial in understanding the phenomenon in Bulgaria, as vigilantism should be considered as a phenomenon emerging in the context of the political, societal and economic crisis in the country during the post-communist period of the nineties and its lingering implications. The recent wave of anti-immigrant vigilante groups is also analysed within the context of a persistent “systematic crisis feeling”, which remains endemic in the country and which was exacerbated by the scale and intensity of the crisis.