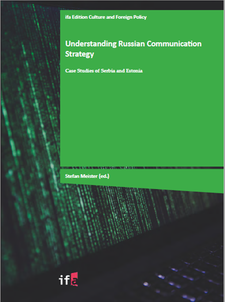 Disinformation and propaganda have become key soft power elements in the updated Russian security policy since 2012/13. For Russian leadership disinformation and propaganda have become key instruments to impact domestic debates in EU member states and in the neighbourhood of the EU. This policy aims to weaken cohesion in the EU and its image in the neighbourhood and has become so successful because of the shrinking self-confidence of Western democracies. The study by the German Foreign Relations Institute (IFA) in cooperation with the Center for the Study of Democracy (CSD) and the German Council on Foreign Relations (DGAP) analyses Russia‘s communication strategy vis-à-vis Serbia and Estonia focusing on the role of Russian media ownership, propaganda and disinformation. The study provides a detailed overview of the tools used by Russian actors and the aims behind disinformation campaigns across Central and Eastern Europe. It shows how Russia has executed a successful communication strategy that takes advantage of institutional gaps to sow discord in societies and expand Russian economic and political influence.