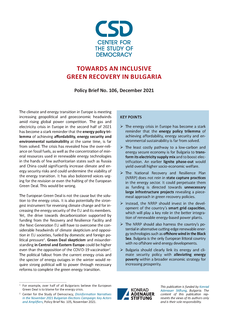 The European Green Deal is potentially the strongest instrument for reversing climate change and for increasing the energy security of the EU and its members. Yet, the drive towards decarbonization supported by funding from the Recovery and Resilience Facility and the Next Generation EU will have to overcome the considerable headwinds of climate skepticism and opposition in EU societies, fueled by domestic and foreign political pressure.

The EU has provided the Bulgarian government with unprecedentedly large resources for decarbonization. But without strategic vision, they would line the pockets of the country’s powerful energy lobbyists with strong links to Russia. The last version of the NRRP sent for approval to the European Commission was a step in the right direction. The Plan has a better macroeconomic basis than previous versions, and the focus on innovation and the energy transition is much stronger.  However, the new NRRP still does not rein in state capture practices in the energy sector, which have prevented the low-carbon transition from taking firm roots so far.