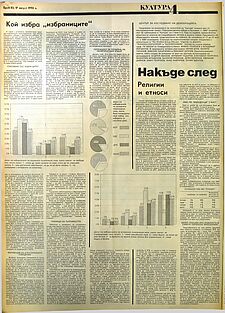 In countries with an established parliamentary tradition, political self-determination after elections usually coincides with the actual result of the elections. Any differences are in favour of the winners. Having in mind the complex psychological relations of Bulgarians to political power, we expected originally that answers in our poll would show a wider following of the Bulgarian Socialist Party, BSP (formerly Communist), than revealed in its electoral percentage. And yet we find exactly the opposite. 38%* claim they have voted for the BSP, and 40% for the Union of Democratic Forces, UDF. What is the reason for the substantial differences between the officially published results and electoral attitudes acknowledged by voters one month after the "magic of the dark room?" The problem is very serious, because if the sample is representative (and such it is) then it becomes obvious that someone is not telling the things as they are.