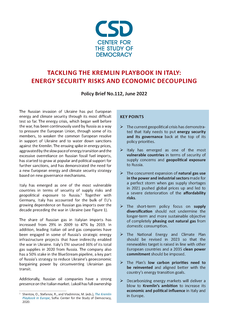 The current geopolitical crisis has demonstrated that Italy needs to put energy security and its governance back at the top of its policy priorities. Despite the rising geopolitical tensions following the Russian annexation of Crimea, the EU in general, and Italy in particular, locked themselves further in an excessive dependence on Russian energy supply. The concurrent expansion of the use of natural gas in the electricity and industrial sectors made for a perfect storm when gas supply shortages in 2021 pushed global prices up and led to a severe deterioration of affordability risks. Meanwhile, the strategic business ties between Russian and Italian companies, in particular the involvement of Italian energy majors, industrial actors, and banks with close ties to the Italian political establishment in the Russian market, has dampened Italy’s resolve for sanctions.

The following analysis, based on the Energy & Climate Security Risk Index, reveals how Italy has emerged as one of the most vulnerable EU countries in terms of security of supply and geopolitical exposure to Russia and other authoritarian states. Italy’s National Energy and Climate Plan should be revised to reflect the need of reducing Italy’s energy sector dependence on the consumption of natural gas by diversifying away from Russia in the short run and phasing out gas completely in the medium run. Focusing the energy policy efforts on the decarbonisation of the energy system would have the strongest impact on improving the nexus between sustainability, affordability, and geopolitical challenges.