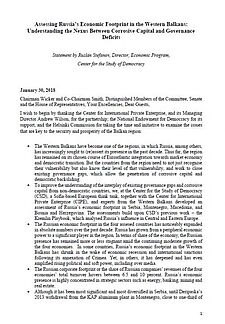 CSD. Statement by the Center for the Study of Democracy regarding Russia’s Economic Footprint in the Western Balkans. Sofia: CSD, 2018

The current Statement by Mr. Ruslan Stefanov, Director, Economic Program, Center for the Study of Democracy was presented during a briefing at the Commission on Security and Cooperation in Europe, also known as the Helsinki Commission, on 30 January 2018 in Washington. The briefing was dedicated to the topic of Foreign Meddling in the Western Balkans: Guarding against Economic Vulnerabilities. In his Statement, Mr. Stefanov underlines that the Western Balkans have become one of the regions, in which Russia, among others, has increasingly sought to (re)assert its presence in the past decade. Thus far, the region has remained on its chosen course of Euroatlantic integration towards market economy and democratic transition. But the countries from the region need to not just recognise their vulnerability but also know their level of that vulnerability, and work to close existing governance gaps, which allow the penetration of corrosive capital and democratic backsliding.