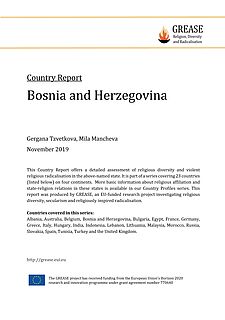 This country report delves into the relationship between state and religion, the governance of religious diversity and the phenomenon of religiously-inspired radicalisation in Bosnia and Herzegovina (BiH). It analyses the ethno-confessional structure of the population and attendant socio-economic particularities. Furthemore, it traces the historical events that have shaped state-religion relations and the administration of religious diversity in the country. The authors also seek to explain the origin and nature of religious radicalisation and evaluate government reponses to this problem.

State-religion relations and religious diversity governance in present-day BiH have been conceptualised in the context of the country’s deeply divided postwar society. A clear separation between the state and religion as well as commitments to freedom of religion and equal rights of all religious communities have been legally established. However, the implementation of these principles faces serious obstructions, especially locally. Anti-systemic ideologies espoused by extremist strands of Salfism have posed a tangible radicalisation threat. Steps have been taken to address such challenges. However, mistrust at the level of state institutions and among the largest constituent ethnic groups has impeded progress in this regard.