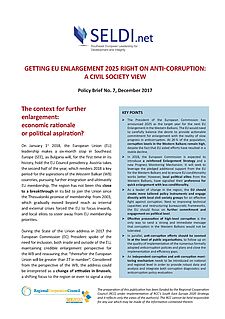 The President of the European Commission has announced 2025 as the target year for the next EU Enlargement in the Western Balkans. The EU would need to carefully balance the desire to provide actionable commitment for enlargement with the reality of slow progress in anticorruption. At 26% of the population, corruption levels in the Western Balkans remain high, despite the fact that EU aided efforts have resulted in a stable decline. In 2018, the European Commission is expected to introduce a reinforced Enlargement Strategy and a new Progress Monitoring Mechanism. It will seek to leverage the pledged additional support from the EU for the Western Balkans and to ensure EU conditionality works better. However, local political elites from the Western Balkans, have signalled their preference for quick enlargement with less conditionality.

The current policy brief underlines that as a leader of change in the region, the EU should create more tailored policy instruments and engage directly with local civil society groups for an effective fight against corruption. Next to improving technical capacities and restructuring bureaucratic frameworks, the EU should focus on further commitment and engagement on political level. Effective prosecution of high-level corruption is the only way to send a strong and immediate message that corruption in the Western Balkans would not be tolerated. In parallel, anti-corruption efforts should be zoomed in at the level of public organisations, to follow up on the quality of implementation of the numerous formally adopted anticorruption policies and plans and close the implementation and efficiency gaps. An independent corruption and anti-corruption monitoring mechanism needs to be introduced on national and regional level in order to provide robust data and analysis and integrate both corruption diagnostics and anticorruption policy evaluation.