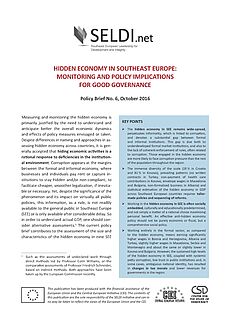 The current policy brief presents SELDI’s key findings on the manifestations, causes and impacts of the hidden economy and undeclared labour in SEE in 2016. According to the research, the hidden economy in SEE remains wide-spread, perpetuates informality, which is linked to corruption, and denotes a substantial gap between formal and informal institutions. This gap is due both to underdeveloped formal market institutions, and also to the lack of coherent enforcement of rules, often related to corruption. Those engaged in the hidden economy are more likely to face corruption pressure than the rest of the population throughout the region.

The immense diversity of scale (19 % in Croatia and 81 % in Kosovo), prevailing patterns (no written contracts in Turkey, non payment of health care contributions in Kosovo, envelope wages in Macedonia and Bulgaria, non-formalised business in Albania) and statistical estimation of the hidden economy to GDP across Southeast European countries requires tailor-made policies and sequencing of reforms.

Working entirely in the formal sector as compared to the hidden economy earns significantly higher wages in Bosnia and Herzegovina, Albania and Turkey, slightly higher in Macedonia, Serbia and Montenegro and about the same or slightly lower in Kosovo and Bulgaria. However, sustained high-levels of the hidden economy in SEE, coupled with systemic petty corruption, low trust in public institutions, and in some cases ambiguous national identity, has resulted in change in tax morale and lower revenues for governments in the region.