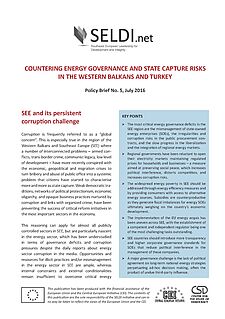 The policy brief analyses the energy sector governance deficits and related corruption risks. Weak democratic traditions, networks of political protectionism, economic oligarchy, and opaque business practices nurtured by corruption and links with organized crime, have been preventing the success of critical reform initiatives in the most important sectors in the Southeast Europe economy.This reasoning can apply for almost all publicly controlled sectors in SEE, but are particularly nascent in the energy sector, which has been understudied in terms of governance deficits and corruption pressures despite the daily reports about energy sector corruption in the media. Opportunities and resources for illicit practices and/or mismanagement in the energy sector in SEE are ample, whereas internal constraints and external conditionalities remain insufficient to overcome critical energy security risks and sectorial vulnerabilities. Among the most critical energy governance deficits are the widespread corruption risks in the mismanagement of the state-owned energy enterprises (SOEs), the irregularities in the public procurement contracts and the slow progress in liberalising and de-monopolising the energy sector, which isolates the corrupt networks from the disruptive market forces.