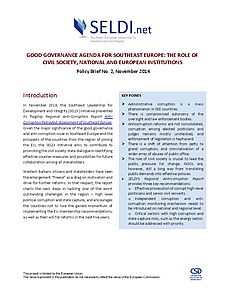 In November 2014, the Southeast Leadership for Development and Integrity (SELDI) initiative presented its flagship Regional Anti-Corruption Report Anti-Corruption Reloaded: Assessment of Southeast Europe. Given the major significance of the good governance and anti-corruption issue in Southeast Europe and the prospects of the countries from the region of joining the EU, the SELDI initiative aims to contribute to promoting the civil society-state dialogue in identifying effective counter-measures and possibilities for future collaboration among all stakeholders.

Western Balkans citizens and stakeholders have seen the enlargement “freeze” as a drag on motivation and drive for further reforms. In that respect, the report charts the next steps in tackling one of the worst outstanding challenges in the region – high level political corruption and state capture, and encourages the countries not to lose the gained momentum of implementing the EU membership recommendations, as well as their will for reforms in the next five years.