Russian Influence in the Media Sectors of the Black Sea Countries 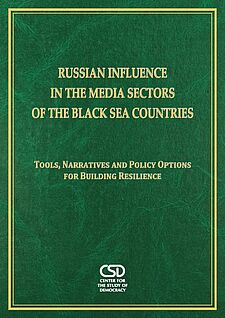 Russian Influence in the Media Sectors of the Black Sea Countries

The Black Sea region has been subject to increasing pressure and uncertainty, following Russia’s occupation of parts of Georgia in 2008, the annexation of Crimea and destabilization of eastern Ukraine in 2014, and the continuing military stand-off to NATO in the Black Sea and beyond after the intervention in Syria in 2015. These developments have demonstrated Moscow’s determination to revise the post-Cold War order by applying pressure through hard- and softpower instruments on both members and associate partners of the EU and NATO in order to undermine Euro-Atlantic cohesion and unity. A particularly prominently deployed weapon of choice of the Kremlin has been media propaganda and disinformation.

The report examines Russia’s presence and tactics in the media sectors of five Black Sea countries, by assessing the relationship between the Kremlin’s corporate and financial footprint in the media outlets of these states and the dissemination of pro-Russian and anti-Western propaganda content. It confirms that the patterns of ownership, economic dependency and (in)formal political links of media outlets in the countries under investigation to pro-Russian groups and interests are correlated with and reflected into corresponding trends of employing Russia-originating propaganda narratives.