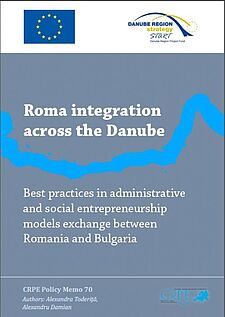 The vast majority of Roma population in Europe (80%) lives in the 14 countries of the Danube Region, the population percentage of Roma varying greatly from country to county, with the strongest concentrations in poor and peripheral regions. Although only estimates of the exact population exist, Romania and Bulgaria, alongside Hungary and Slovakia have the highest shares of Roma within the overall population in the entire European Union. While National Roma Integration Strategies have been in place in these countries in the last few years, their effective implementation and success has been limited to this day.

Aiming to facilitate the reciprocally useful exchange of experience between municipalities, civil society and Roma entrepreneurs from Bulgaria and Romania, the Romanian Center for European Policies, RomanoButiq and the Center for the Study of Democracy launched on 1 February 2016 an initiative Roma integration across the Danube: Best practices and social entrepreneurship models exchange between Romania and Bulgaria. Among the outcomes of the joint initiative is the current report, aiming to emphasize the fact that there have been certain projects and initiatives from both the public and private spheres that have been implemented in Romania and Bulgaria with a noteworthy degree of success, to put them forth and create the context for relevant Roma stakeholders (NGOs, local administration representatives, Roma entrepreneurs) from both countries to mutually gain a complex understanding of the contexts and workings of the best practice examples, to experience them first hand, understand the factors that led to their success and replicate them in their own country. The report presents the experience of the visit in the town of Kavarna and sets the basis for further cooperation mechanisms on the regional level on the topic of social entrepreneurship and Roma administrative integration models.

The project is part of START – Danube Region Project Fund, part-financed by the European Union and the City of Vienna.