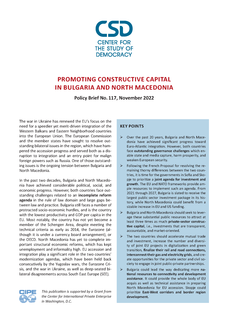 The war in Ukraine has renewed the EU’s focus on the need for a speedier yet merit-driven integration of the Western Balkans and Eastern Neighborhood countries into the European Union. The European Commission and the member states have sought to resolve outstanding bilateral issues in the region, which have hampered the accession progress and served both as a disruption to integration and an entry point for malign foreign powers such as Russia. One of those outstanding issues is the ongoing tension between Bulgaria and North Macedonia.

In the past two decades, Bulgaria and North Macedonia have achieved considerable political, social, and economic progress. However, both countries face outstanding challenges related to an incomplete reform agenda in the rule of law domain and large gaps between law and practice. Bulgaria still faces a number of protracted socio-economic hurdles, and is the country with the lowest productivity and GDP per capita in the EU. Most notably, the country has not yet become a member of the Schengen Area, despite meeting the technical criteria as early as 2014, the Eurozone (although it is under a currency board arrangement), or the OECD. North Macedonia has yet to complete important structural economic reforms, which has kept unemployment and informality high. EU accession and integration play a significant role in the two countries’ modernization agendas, which have been held back consecutively by the Yugoslav wars, the Eurozone Crisis, and the war in Ukraine, as well as deep-seated bilateral disagreements across South East Europe (SEE).