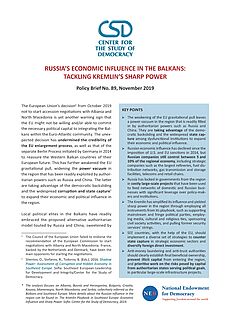 The weakening of the EU gravitational pull leaves a power vacuum in the region that is readily filled in by authoritarian powers such as Russia and China. They are taking advantage of the democratic backsliding and the widespread state capture among dysfunctional institutions to expand their economic and political influence. This policy brief zooms in on Russia estimating its economic footprint in Southeastern Europe following the imposition of EU and US sanctions in 2014 and showcases the most important elements of the Russian strategy in the region.  Russian economic influence has declined since the imposition of U.S. and EU sanctions in 2014, but Russian companies still control between 5 and 10% of the regional economy, including strategic companies such as the largest refineries, fuel distribution networks, gas transmission and storage facilities, telecoms and retail chains. Meanwhile, the Kremlin has amplified its influence and yielded sharp power in the region through employing all instruments from its playbook, such as supporting mainstream and fringe political parties, employing media, cultural and religious ties, sponsoring civil society activities, and pulling former security services’ strings.