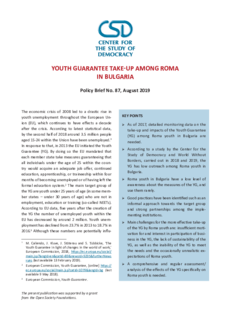 The economic crisis of 2008 led to a drastic rise in youth unemployment throughout the European Union (EU), which continues to have effects a decade after the crisis. According to latest statistical data, by the second half of 2018 around 3.5 million people aged 15-24 within the Union have been unemployed. In response to that, in 2013 the EU initiated the Youth Guarantee (YG). According to a study by the Center for the Study of Democracy and World Without Borders, carried out in 2018 and 2019, the YG has low outreach among Roma youth in Bulgaria.