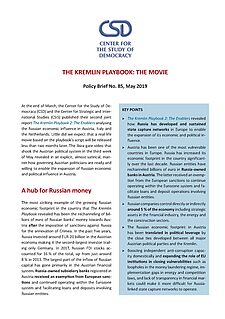 The Kremlin Playbook 2: The Enablers revealed how Russia has developed and sustained state capture networks in Europe to enable the expansion of its economic and political influence.

Austria has been one of the most vulnerable countries in Europe. Russia has increased its economic footprint in the country significantly over the last decade. Russian entities have rechanneled billions of euro in Russia-owned banks in Austria. The latter received an exemption from the European sanctions to continue operating within the Eurozone system and facilitate loans and deposit operations involving Russian entities.