Policy Brief No. 78: Trafficking for Sexual Exploitation in Bulgaria: Criminal Finances and Capacity for Financial Investigations 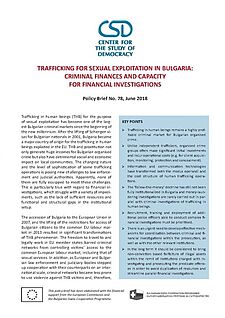 Policy Brief No. 78: Trafficking for Sexual Exploitation in Bulgaria: Criminal Finances and Capacity for Financial Investigations

Trafficking in human beings (THB) for the purpose of sexual exploitation has become one of the largest Bulgarian criminal markets since the beginning of the new millennium. After the lifting of Schengen visas for Bulgarian nationals in 2001, Bulgaria became a major country of origin for the trafficking in human beings exploited in the EU. THB and prostitution not only generate huge incomes for Bulgarian organised crime but also have detrimental social and economic impact on local communities.

There is an urgent need to develop effective mechanisms for coordination between criminal and financial investigations within the prosecution, as well as with the other relevant institutions.