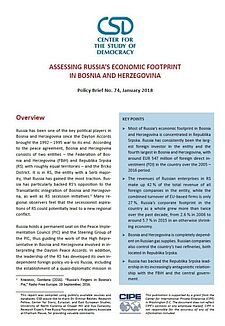 The current policy brief highlights that Bosnia and Herzegovina is completely dependent on Russian gas supplies. Russian companies also control the country’s two refineries, both located in Republika Srpska. Russia has consistently been the largest foreign investor in RS and the fourth largest in Bosnia and Herzegovina, with around EUR 547 million of foreign direct investment (FDI) in the country over the 2005 – 2016 period.