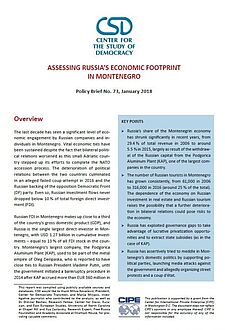 The last decade has seen a significant level of economic engagement by Russian companies and individuals in Montenegro. Vital economic ties have been sustained despite the fact that bilateral political relations worsened as this small Adriatic country stepped up its efforts to complete the NATO accession process. The deterioration of political relations between the two countries culminated in an alleged failed coup attempt in 2016 and the Russian backing of the opposition Democratic Front (DF) party. Even so, Russian investment flows never dropped below 10 % of total foreign direct investment (FDI).

The current policy brief underlines that Russia has exploited governance gaps to take advantage of lucrative privatization opportunities and to extract state subsidies in Montenegro. The authors also highlight that Russia has assertively tried to meddle in Montenegro’s domestic politics.