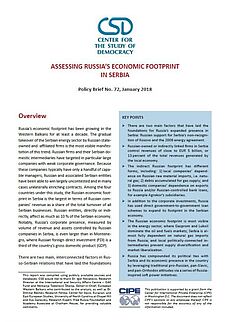 The Russian economic footprint has been deepening in some countries in the Western Balkans for at least a decade. In what is the most visible manifestation of this trend, Russian entities have gradually taken over the Serbian energy sector. Russian entities, directly or indirectly affect as much as 10 % of the economy. Notably, corporate presence measured by volume of revenues and assets controlled by Russian companies in Serbia is even larger than in Montenegro, where Russian foreign direct investments are a third of the country’s GDP.

There are two main interconnected factors in Russo-Serbian relations that have laid the foundations for Russia’s expanded power in the country. One is Russian support for Serbia’s non-recognition of Kosovo’s unilateral declaration of independence, and the second is a 2008 energy agreement that included Gazprom’s takeover of Serbia’s largest state-owned company, oil and gas firm Naftna Industrija Srbije (NIS).

The current policy brief notes that in addition to the corporate investments, Russia has used direct government-to-government loan schemes to enhance its presence in the Serbian economy. The authors also highlight that Russia has compounded its political ties with Serbia and its economic presence in the country by leveraging traditional pro-Russian, pan-Slavic, and pan-Orthodox attitudes via a series of soft power initiatives.