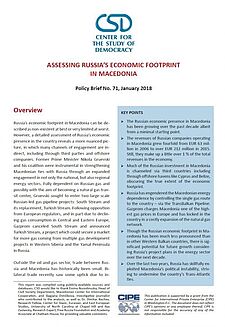 Russia’s economic footprint in Macedonia has often been perceived as non-existent at best or very limited at worst. However, a detailed assessment of the Russian presence in the country reveals a more nuanced picture, in which many of the engagement channels are indirect, including through third parties and offshore companies. The revenues of Russian companies operating in Macedonia grew fourfold from EUR 63 million in 2006 to over EUR 212 million in 2015.

Much of the Russian investment in Macedonia is channeled via third countries including through offshore havens like Cyprus and Belize, obscuring the true extent of the economic footprint. Russia has also engendered the Macedonian energy dependence by controlling the single gas route to the country – via the TransBalkan Pipeline. Gazprom charges Macedonia one of the highest gas prices in Europe and has locked in the country in a costly expansion of the natural gas network. The current policy brief underlines that though the Russian economic footprint in Macedonia has been much less pronounced than in other Western Balkan countries, there is significant potential for future growth considering Russia’s project plans in the energy sector over the next decade. The authors also note that over the last two years, Russia has skillfully exploited Macedonia’s political instability, striving to undermine the country’s Trans-Atlantic ties.