Policy Brief No. 67: Turkey in The Framework of the EU Energy Union: Energy Security and Governance Risks 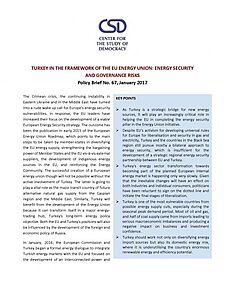 Policy Brief No. 67: Turkey in The Framework of the EU Energy Union: Energy Security and Governance Risks

The successful creation of a European energy union will not be possible without the active involvement of Turkey. The latter is going to play a vital role as the major transit country of future alternative natural gas supply from the Caspian region and the Middle East. Similarly, Turkey will benefit from the development of the Energy Union because it can transform itself in a major energy-trading hub, Turkey’s long-term energy policy objective. The EU and Turkey also share a common objective to diminish their dependence on Russian energy imports, which could provide a necessary boost to the formal energy dialogue between the two partners in January 2016.