Policy Brief No. 60: Media (In)dependence in Bulgaria: Risks and Trends 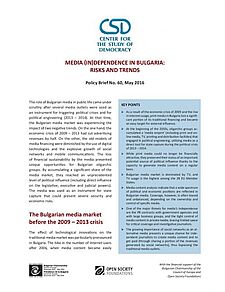 Policy Brief No. 60: Media (In)dependence in Bulgaria: Risks and Trends

The role of Bulgarian media in public life came under scrutiny after several media outlets were used as an instrument for triggering political crises and for political engineering (2013 – 2014). At that time, the Bulgarian media market was experiencing the impact of two negative trends. On the one hand, the economic crisis of 2009 – 2013 had cut advertising revenues by half. On the other, the old models of media financing were diminished by the use of digital technologies and the explosive growth of social networks and mobile communications. The loss of financial sustainability by the media presented unique opportunities for Bulgarian oligarchic groups. By accumulating a significant share of the media market, they reached an unprecedented level of political influence (including direct influence on the legislative, executive and judicial powers). The media was used as an instrument for state capture that could present severe security and economic risks.