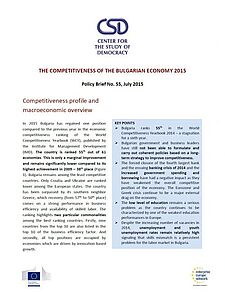 In 2015 Bulgaria has regained one position compared to the previous year in the economic competitiveness ranking of the World Competitiveness Yearbook (WCY), published by the Institute for Management Development (IMD). The country is ranked 55th out of 61 economies. This is only a marginal improvement and remains significantly lower compared to its highest achievement in 2009 – 38th place.

The ranking highlights two particular commonalities among the best ranking countries. Firstly, nine countries from the top 10 are also listed in the top 10 of the business efficiency factor. And secondly, all top positions are occupied by economies which are driven by innovation-based growth.

In the policy brief the Center for the Study of Democracy provides the following recommendations for increasing the competitiveness of the Bulgarian economy: