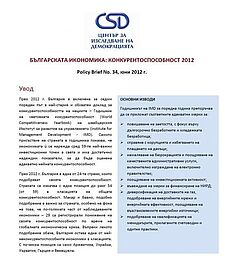 The policy brief presents the ranking of Bulgaria at the oldest and most comprehensive competitiveness report of nations – the World Competitiveness Yearbook 2012 of the Institute for Management Development - IMD. The mere presence of the country in the yearbook shows that the Bulgarian economy ranks among the 59 most important points in the investment world and it has reliable indicators to assess adequately its competitiveness. In 2012, Bulgaria is one of the 24 countries that improved their competitiveness compared to 2011. The country climbed up one place to the rank of 54th out of 59 countries in the ranking of global competitiveness. Although slow, such improvement is important for the country, especially considering the fact that most of the surveyed economies - 29 have registered a decrease of their competitiveness during the global economic crisis. Despite the slight improvement, however, Bulgaria remains one of the most uncompetitive economies in the ranking. With lower positions are only Argentina, Ukraine, Croatia, Greece and Venezuela.