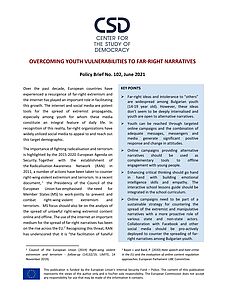 Over the past decade, European countries have experienced a resurgence of far-right extremism and the internet has played an important role in facilitating this growth. The internet and social media are potent tools for the spread of extremist propaganda, especially among youth for whom these media constitute an integral feature of daily life. In recognition of this reality, far-right organizations have widely utilized social media to appeal to and reach out this target demographic. The importance of fighting radicalisation and terrorism is highlighted by the 2015-2020 European Agenda on Security. Together with the establishment of the Radicalisation Awareness Network (RAN) in 2011, a number of actions have been taken to counter right-wing violent extremism and terrorism.

The current publication discusses the opportunities that strategic communication brings as a tool to counteracting violent narratives and achieving resilience among youth and puts forward a number of lessons learned through the implementation of the Find Another Way communications campaign.