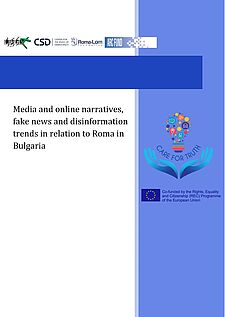 Media and online representations play a formative role in establishing public attitudes as their responsibility far exceeds informative functions and enters the domain of reasserting norms of morality and exclusivity. This aspect of the public domain’s ability to influence group dynamics and everyday realities has the potential to severely affect vulnerable populations by further exacerbating their marginality with regard to political and socio-economic debates. Social media have provided an escape from the dominant information and media channels by allowing a non-linear and more selective content consumption. However, the relative freedom and agency allowed by non-traditional media channels, such as Facebook and YouTube, have paved the way for the spread of disinformation and fake news, which have become more accessible and prominent in the everyday lives of a vulnerable and excluded group in Bulgaria –  the Roma community.

The report “Media and online narratives, fake news and disinformation trends in relation to Roma in Bulgaria" investigates the hostile relationship between online media channels and the Roma community through the prism of disinformation and fake news. The study reports on results from data obtained through online media analysis and focus group data with Roma activists, leaders, mediators, and youth.

The report approaches the issue of media hostility against the Roma community in a twofold manner. On the one hand, it discusses the persisting anti-Roma stereotypes, myths, and prejudicial images which permeate the public domain through new and adaptive online practices for asserting negative narratives and attitudes. On the other hand, the report analyses the effects of media hostility, fake news, and disinformation campaigns on members of the Roma community whose susceptibility to fraudulent information and inter-group stereotypes has been strongly influenced by social media and anti-integration attitudes.

Co-funded by the Rights, Equality and Citizenship (REC) Programme