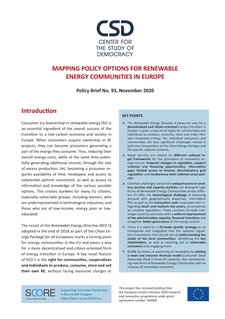 Consumer (co-)ownership in renewable energy (RE) is an essential ingredient of the overall success of the transition to a low-carbon economy and society in Europe. When consumers acquire ownership in RE projects, they can become prosumers generating a part of the energy they consume. Thus, reducing their overall energy costs, while at the same time potentially generating additional income, through the sale of excess production. Yet, becoming a prosumer requires availability of time, headspace and access to substantial up-front investment, as well as access to information and knowledge of the various possible options. This creates burdens for many EU citizens, especially vulnerable groups, including women, who are underrepresented in technological industries, and those who are of low-income, energy poor or low-educated.

Based upon the findings and conclusions from recent research on the economic, social, technological and governance enabling conditions and barriers in promoting prosumership and renewable energy communities in Europe, an international team of researchers and practitioners is endeavouring to facilitate the co-ownership in RE. It has done so by piloting a new financial model, the Consumer Stock Ownership Plan, in Italy, the Czech Republic and Germany with numerous European cities following.

As a financial instrument, the Consumer Stock Ownership Plan brings several advantages with regard to the set-up of Renewable Energy Communities. It also provides consumers with flexible participation, external financing and long-term loan repayment, thereby encouraging the engagement of low-income households.