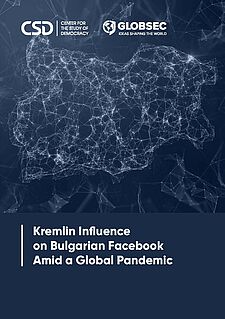 This report aims to compare and contrast two network maps of the Bulgarian Facebook information landscape drawn at two different periods (September 16 - October 16, 2020 and February 17 – March 19, 2021). Both maps were produced using Graphika, an AI tool for social network analysis. The report is part of a series of analyses in Central and Eastern Europe that use the tool to visualize how Russian influence impacts social media.

Notable substantive changes to Bulgaria’s Facebook ecosystem over the past year include more interactions and content dissemination in the pseudo-patriotic cluster of FB pages. Along nationalist and COVID-19 conspiracy narratives, the pages in the cluster have been also disseminating posts extolling the virtues of the former communist regime and lending support to leading pro-Russian political figures in Bulgaria. A new cluster not present in the first version of the map was also identified in the analysis. Despite its small size, it is located in close vicinity to the Russian Foreign Policy and Soft Power group and often spreads disinformation narratives and conspiracy theories that overlap with those originating from the Kremlin.