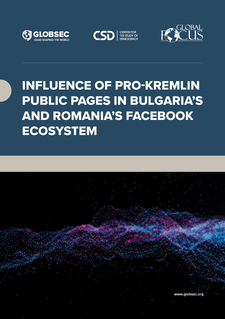 The aim of this report is to provide in-depth contextual assessment of about pro-Kremlin influence operations and networks active on Romanian and Bulgarian public Facebook pages. To this purpose, the Center for the Study of Democracy (CSD) teamed up with the Slovak think tank, GLOBSEC and the Romanian institute, Global Focus, to leverage the Graphika online tool for the creation of a powerful social media landscape visualization of networks and information diffusion through these networks. The report is part of a series of analyses in Central and Eastern Europe that use the tool to visualize how Russian influence impacts social media. The result displays a complex picture in each country with the Bulgarian and Romanian maps containing 13,179 and 4,741 pages, respectively. The assessment reveals that the pro-Kremlin influence in Bulgaria is linked mostly to left-wing political pages and some pseudo-nationalistic accounts that advance pro-Russian interpretations of Bulgarian history and the socio-economic and political development of the country. The latter pages are located in a cluster in close proximity to mainstream pages, thereby indicating a possible channel through which Russian disinformation, intermixed with general content, could be disseminated to a broader audience.