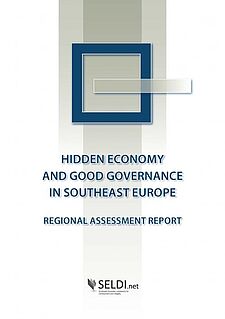 The current report examines the key drivers of the hidden economy and its impact on the overall economy in SEE, and in particular the employment, social and fiscal sectors. The authors focus on the links between hidden economy and corruption, especially the administrative corruption, related to VAT drain, tax payment evasion, social security payment evasion, and “speeding up” business related services. They propose new approaches for measuring and analysing the phenomena, as well as preventive and counter-measures.

The hidden economy in SEE remains wide-spread, perpetuates informality, which is linked to corruption, and denotes a substantial gap between formal and informal institutions. This gap is due both to underdeveloped formal market institutions, and also to the lack of coherent enforcement of rules, often related to corruption. Those engaged in the hidden economy are more likely to face corruption pressure than the rest of the population throughout the region.
The immense diversity of the scale of the phenomenon (19 % in Croatia and 81 % in Kosovo), its prevailing patterns (no written contracts in Turkey, non-payment of health care contributions in Kosovo, envelope wages in Macedonia and Bulgaria, non-formalised business in Albania) and statistical estimation of the hidden economy in GDP across Southeast European countries leads to the conclusion that any successful counter-measures would require tailor-made policies and sequencing of reforms.