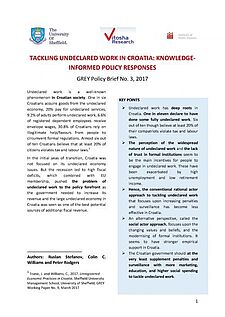 The current policy brief indicates that non-compliant practices are deeply ingrained in Croatia. One in eleven admits to have done some fully undeclared work. Six out of ten Croatians believe that at least 20% of their compatriots violate tax and labor laws. The perception of the widespread nature of undeclared work and the lack of trust in formal institutions seem to be the main incentives for people to engage in undeclared work. These have been further exacerbated by high unemployment and low retirement income. Not surprisingly, the conventional rational actor approach to tackle undeclared work, which centers on penalties and surveillance, has proved less effective in Croatia. Therefore, an alternative perspective, called social actor approach, has been advanced, which focuses upon marketing, education, and higher social spending to tackle undeclared work.