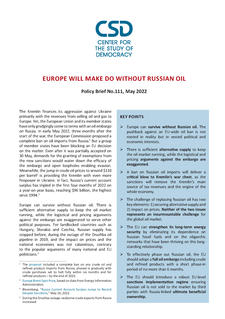 Europe can survive without Russian oil. The pushback against an EU-wide oil ban is not rooted in reality but in vested political and economic interests. There is sufficient alternative supply to keep the oil market running, while the logistical and pricing arguments against the embargo are exaggerated. A ban on Russian oil imports will deliver a critical blow to Kremlin’s war chest, as the sanctions will remove the Kremlin’s main source of tax revenues and the engine of the whole economy.

The following analysis reveals that the EU-wide ban on Russian oil imports would not undermine the European energy security but will able to significantly weaken the foundations of the Russian economic and political power. It is also a historic opportunity for Europe to cut its malignant dependence not only on Russian fossil fuels but even more importantly on the domestic oligarchic networks that thrive on this relationship. Only in this way could an effective long-term European energy and climate security strategy emerge.

Can Bulgaria Survive without Russian Oil?
EU Energy and Climate Security Strategy to Counter the Russian Aggression in Europe
Back to list
Subscribe to our newsletter
Related