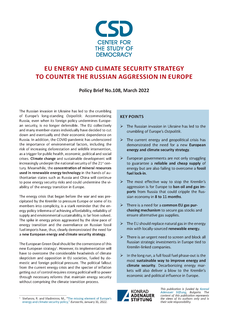 The Russian invasion in Ukraine and the resulting energy and geopolitical crisis have clearly demonstrated that accommodating Russia, even when its foreign policy undermines European security, is no longer defensible. The Russian aggression in Europe and the critical dependence on Russian oil and gas imports have clearly demonstrated the need for a new European energy and climate security strategy. European governments are not only struggling to guarantee a reliable and cheap supply of energy but are also failing to overcome a fossil fuel lock-in.

The most effective way to stop the Kremlin’s aggression is for Europe to ban oil and gas imports from Russia that could cripple the Russian economy in 8 to 11 months. This needs to be accompanied by emergency measures to protect vulnerable consumers and alleviate Europe’s critical vulnerabilities before the next heating season. In the long run, a full fossil fuel phase-out is the most sustainable way to improve energy and climate security. Decarbonizing energy markets will also deliver a blow to the Kremlin’s economic and political influence in Europe.