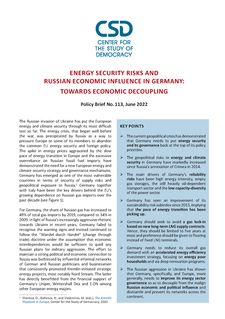 Germany has emerged as one of the most vulnerable EU countries in terms of energy and climate security risks. The geopolitical risks have markedly increased since Russia’s annexation of Crimea in 2014 due to the growing dependence on Russia and on the consumption of natural gas. The energy security has deteriorated also on the back of glaring governance loopholes, which have been exploited by the Kremlin to cultivate opaque networks of patronage to influence the country’s strategic energy decisions.

The following analysis, based on the Energy & Climate Security Risk Index, reveals how Germany, and by extension, the EU, is struggling to solve the energy policy trilemma of achieving at the same time affordability, reliability of supply and environmental sustainability. Germany faces structural energy and climate security risks that can be overcome only by a long-term policy effort that will bridge the country’s ambitious security of supply and decarbonisation targets.

Switching the Gears of Europe’s Energy and Climate Security Strategy: The View from...
Back to list
Subscribe to our newsletter
Related