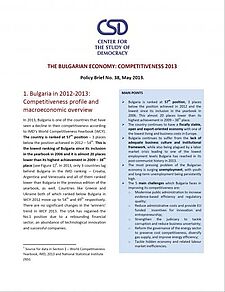 In 2013, Bulgaria is one of the countries that have seen a decline in their competitiveness according to IMD’s World Competitiveness Yearbook (WCY). The country is ranked at 57th position – 3 places below the position achieved in 2012 – 54th. This is the lowest ranking of Bulgaria since its inclusion in the yearbook in 2006 and it is almost 20 places lower than its highest achievement in 2009 – 38th place. In 2013, only 3 countries lag behind Bulgaria in the IMD ranking – Croatia, Argentina and Venezuela and all of them ranked lower than Bulgaria in the previous edition of the yearbook, as well. Countries like Greece and Ukraine both of which ranked below Bulgaria in WCY 2012 move up to 54th and 49th respectively. There are no significant changes in the ‘winners’ trend in WCY 2013. The USA has regained the No.1 position due to a rebounding financial sector, an abundance of technological innovation and successful companies.

The 5 main challenges which Bulgaria faces in improving its competitiveness are: