CSD Brief No 11: The Future of Corruption Benchmarking in the EU 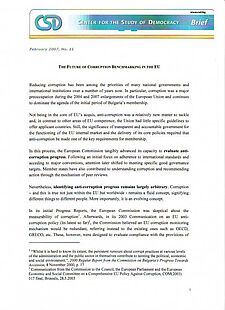 CSD. CSD Brief No 11: The Future of Corruption Benchmarking in the EU. Sofia: CSD, 2007
Policy brief

CSD Brief No 11: The Future of Corruption Benchmarking in the EU

Matters of justice and home affairs, and in particular corruption, have been among the key challenges during the last wave of EU enlargement. Significant efforts have been invested by member states, the European Commission and Bulgaria in meeting these challenges. Still, identifying anti-corruption progress remains largely arbitrary. Corruption – and this is true not just within the EU but worldwide - remains a fluid concept, signifying different things to different people.
Monitoring of the EU of Bulgaria’s anti-corruption progress has not only encouraged reform policies but has motivated the perfection of domestic measurement instruments. These instruments have been developed by CSD and applied for over eight years now. Thus, the Bulgarian experience has brought policy institutions and researchers a step closer to the development of a methodology of benchmarking corruption which could be the foundation of a future EU anti-corruption policy.
Diagnosing the state of corruption and obtaining reliable information about its dynamics are crucial to the implementation of successful prevention and control policies, including within the EU itself. The evolution of the EU’s policies in the area of anti-corruption suggests that the next logical step in this process is the development of EU’s own methodology for benchmarking corruption, as has been done in other areas. This would entail a capacity to diagnose the spread of corruption through a common measurement technique and comparing it against a certain best practice standard.