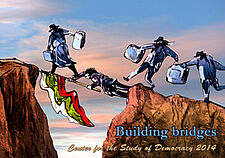 In 2015, the Center for the Study of Democracy marks its 25th anniversary. This is a good reason to look back and reflect on the changes, the accomplishments, and the challenges lying ahead. Along the thorny road from the fall of the Berlin wall through Bulgaria’s membership in NATO and the EU, the Center has been both an involved observer and a driver of societal change, a ‘think tank with teeth’ that has revealed the major challenges of Bulgaria’s transition and has relentlessly promoted policy reforms to address them.

These are a few of the areas where the Center’s efforts have produced measurable and beneficial impact:

Coalition building and monitoring for anti-corruption Since 1998, the Center for the Study of Democracy has pioneered the anti-corruption efforts of the Bulgarian civil society. CSD introduced an innovative public-private partnership format for co-operation among NGOs, governmental institutions and individuals for delivering anti-corruption awareness raising and policy advocacy. It consists of three pillars:

At present, the PPP format established in this way may look self-evident, but this was not the case in the second half of the 1990s. Back then, such civil society efforts were confined to raising public awareness about corruption and were seen as secondary to state institution actions. The CSD-led Coalition 2000 initiative pioneered this format in Bulgaria, while internationally this was achieved through the Southeast European Leadership for Development and Integrity (SELDI).

CSD has pioneered in another area traditionally perceived as the inviolable domain of state institutions – organised crime and national security. The Center has published ground breaking reports in this domain since the late 1990s. CSD has introduced new policy instruments in this area, such as the first Serious and Organized Crime Threat Assessment for Bulgaria. SOCTA analysed all major criminal markets and estimated their annual volumes. The SOCTA process was an exemplary cooperation between law-enforcement institutions, bringing together in close cooperation an NGO, the Bulgarian Ministry of Interior, the UK Serious Organised Crime Agency and law-enforcement institutions from Austria, Belgium, Germany and the Netherlands.

The Center has conducted its annual National Crime Survey (NCS) of victims of crime, which has become the most influential alternative to police crime statistics.

The presentation of annual results are closely followed by politicians, the media, and civil society.

Since the beginning of the democratic transition in Bulgaria, CSD has been actively involved in the legislative reform in the country, championing and contributing to the establishment of new legislation in a range of pivotal areas. The Center has engaged in the creation of many critical pieces of legislation, but it is a whole institution that stands out as an example of CSD’s rule of law and democratization efforts. CSD has initiated and overseen the establishment of the Ombudsman institution. It is a complementary mechanism for monitoring and control over the public administration and an out-of-court means of respecting and restoring human rights violated by the state. Following a long-standing and consistent advocacy, CSD drafted the legislation adopted in 2003, as well as the Internal Procedural Rules of the Ombudsman. Nowadays, the Ombudsman institution has become synonymous with equal, quick and easy access to justice and enjoys the highest trust of citizens.

These are only a few of the milestones that can be mentioned when looking back at CSD’s 25 year-old history. Other areas where CSD has exercised a significant influence in shaping national reform policies have been private sector development, energy security, and curbing the hidden economy. We look forward to the next 25 years of active engagement and positive social impact. 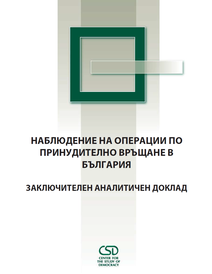