Cross-border organised crime: Bulgaria and Norway in the Context of the Migrant Crisis 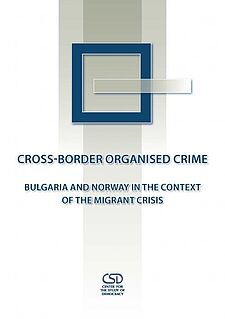 Cross-border organised crime: Bulgaria and Norway in the Context of the Migrant Crisis

The irregular migrant and refugee crisis poses serious challenges for Europe. The unprecedented migration pressure presents an opportunity for the generation of substantial profits by organised criminal networks. The large influx of irregular migrants looking for facilitation has led to the development of human smuggling as a substantial criminal market in Europe. On the other hand, some countries have experienced a concurrent rise in human trafficking cases.

The current publication presents an analysis of recent developments in transnational organised crime in Norway and Bulgaria in the context of the migrant crisis. The study presents the first in-depth examination of human smuggling networks and operations in Bulgaria, as well as the synergies and differences between this illicit activity and other organised criminal enterprises, particularly human trafficking. The publication also reviews trends in Norway related to both human trafficking and smuggling, two crimes which have rarely been examined together, with the latter being the focus of little overall research.