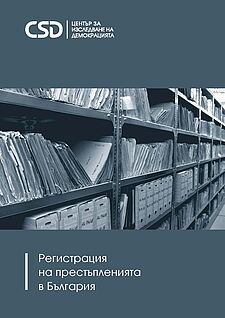 The process of crime registration is dependent on a variety of factors, such as the specifics of the applicable legal framework, the attitudes of citizens towards reporting to police authorities, as well as on certain peculiarities of procedural and practical nature. The exertion of political and managerial pressure regarding lowering the officially reported crime rates is identified as a major prerequisite for the emergence of police filtering in Bulgaria. In the context of the mutual strengthening of the negative consequences of the police filtering and non-reporting of crimes by citizens, especially attention should be paid to the efficiency and reliability of the registration process of police crimes.

This report illustrates an overview of the current legislative framework in Bulgaria, regulating the processing of signals for criminal incidents and their subsequent registration by the police. The report also presents a functional analysis of the procedural aspects related to receiving, registering and processing of such signals, reported by citizens. The report examines the prerequisites in the legislation and its application, which could allow for certain deviations in the process of registration. In addition, the authors have put forward a set of recommendations related to opportunities they have identified for increasing the interaction between the regional structures of the Ministry of Interior, municipal authorities and civil society organizations with the aim to improve the regime for registration and processing of signals. In the context of mutual strengthening of the negative consequences that police filtering has on crime dynamics and non-reporting of criminal incidents by citizens, there is a strong need for paying particular attention to the efficiency and reliability of the procedures pertaining to crime registration.

This publication has been produced with the financial support of the Active Citizens Fund of Bulgaria under the Financial Mechanism of the European Economic Area. The Center for the Study of Democracy is solely responsible for the content of the document and under no circumstances can it be assumed that this document reflects the official opinion of the European Economic Area Financial Mechanism and the Operator of the Active Citizens Fund Bulgaria.