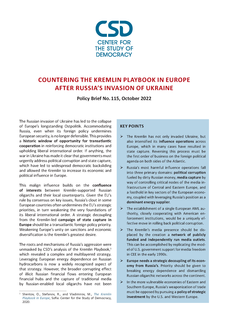 The Russian invasion of Ukraine has led to the collapse of Europe’s longstanding Ostpolitik. Accommodating Russia, even when its foreign policy undermines European security, is no longer defensible. This provides a historic window of opportunity for transatlantic cooperation in reinforcing democratic institutions and upholding liberal international order.  If anything, the war in Ukraine has made it clear that governments must urgently address political corruption and state capture, which have led to widespread democratic backsliding and allowed the Kremlin to increase its economic and political influence in Europe.

This policy brief maps the key mechanisms of the Kremlin Playbook in Europe. It also provides policy recommendations to completing Europe’s economic and political decoupling from Russia and for closing glaring governance gaps that can be exploited by Russia to evade the unprecedented sanctions and preserve its influence in strategic sectors.