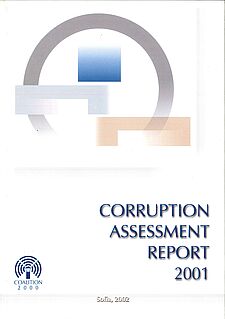 Limiting corruption in Bulgarian society calls not only for institutional and legal measures but also for establishing the rule of law. In this sense, it is of crucial importance to foster a political and economic culture based on trust and respect for public institutions, on transparency and openness in the actions of public administration, and the will to achieve stability and predictability of the economic and social environment.

Coalition 2000 is an initiative of Bulgarian non-governmental organizations which was launched in the spring of 1997 aimed at limiting corruption in Bulgarian society through a partnership between state institutions, non-governmental organizations, and individuals, who developed and have been implementing an Anti-Corruption Action Plan, Corruption Monitoring System, and an anti-corruption public awareness campaign.

The Corruption Assessment Report 2001 follows the structure and approach of the Action Plan adopted by the Policy Forum of Coalition 2000 in November, 1998. It presents a general evaluation of the state and dynamic of corruption in Bulgarian society and of the efforts to counteract corruption in the year 2001.