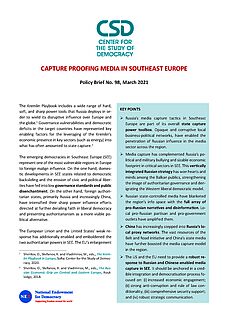 The emerging democracies in Southеast Europe (SEE) represent one of the most vulnerable regions in Europe to foreign malign influence. On the one hand, domestic developments in SEE states related to democratic backsliding and the erosion of civic and political liberties have fed into low governance standards and public disenchantment. On the other hand, foreign authoritarian states, primarily Russia and increasingly China, have intensified their sharp power influence efforts directed at further derailing faith in liberal democracy and presenting authoritarianism as a more viable political alternative.

This brief presents the policy recommendations on a comprehensive Transatlantic response to Russia and China’s media capture influence in Southeast Europe, including EU members Bulgaria and Croatia as well as EU aspirants Serbia, Bosnia and Herzegovina, Montenegro, North Macedonia, Albania and Kosovo. It reviews the scope, means and reach of Russia’s sharp power influence through the phenomenon of media capture in Southeast Europe and proposes a framework for addressing governance gaps in the Balkans, which could help build resilience to foreign malign influence in the region.