Bulgaria and the South Stream Pipeline Project: At the Crossroad of Energy Security and State Capture Risks 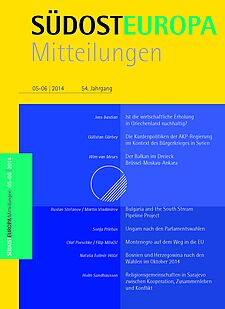 Bulgaria and the South Stream Pipeline Project: At the Crossroad of Energy Security and State Capture Risks

In 2014 the question of Europe’s energy security made it to the top of the European Union’s policy agenda amidst the continuing crisis in Ukraine. Russia has demonstrated its capacity to exert political influence on the countries in Southeast Europe and the Black Sea regions by leveraging its dominant position on their energy markets. It has successfully pressured the government of Bulgaria to support its flagship project, South Stream, at the expense of the country’s long-term strategy to diversify its natural gas supply.

The article highlights the development of the Gazprom-led project in Bulgaria by taking stock of the country’s energy security situation and shedding light on state capture risks related to the pipeline. Governance deficits in the Bulgarian energy sector have ultimately limited Bulgaria’s bargaining power on the project, worsening the country’s overall energy security position, and putting an additional strain on public finances. Bulgaria’s commitment to South Stream has been in conflict with Bulgarian and EU energy priorities, as well as with European Commission competition and liberalisation principles. Bulgaria has started the project’s implementation without independent planning and cost-benefit analysis. The focus on the project has diverted attention and resources from priority energy security investments, such as gas interconnectors and storage facilities, gas and power exchanges, energy poverty as well as energy efficiency.