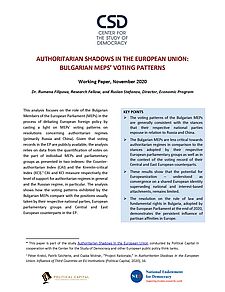 The European Parliament's resolution on the rule of law and fundamental rights in Bulgaria (adopted on 8 October 2020) has raised awareness of the impact of European-level policies and initiatives on domestic politics as well as of the role played by Bulgaria's representatives to EU institutions.

The Center for the Study of Democracy contributes to the understanding of these developments through an analysis of the Bulgarian MEPs' voting patterns in relation to resolutions debated and adopted in the European Parliament with respect to the practices of authoritarian regimes, primarily Russia and China. The key conclusions point to the fact that Bulgaria's European representatives vote in ways that consistently reflect the views of their respective national parties, while being much less critically-oriented towards Moscow and Beijing than their European parliamentary groups. These results show that the potential for Europeanization remains limited as nationally partisan views and interests continue to prevail over common European principles and action.

In Unity there is Strength: From Responding to Authoritarian Threats to Disinformation, Radan Kanev believes that further integration within the EU and across the Atlantic is the key to the EU’s success