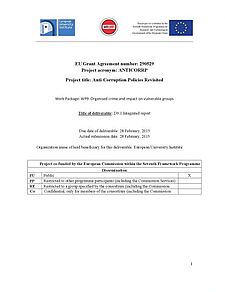 This integrated report investigates the link between political corruption and organised crime, by examining the modalities, resources and strategies used by criminal groups to govern and/or capture the market of political corruption. On the one hand, the report looks at the infiltration of organised crime in three main policy sectors where public spending and regulations play a pivotal role: public procurement, the privatization of public services, and management of EU funds.

Alongside this, the report also analyses the criminal penetration of electoral politics, by evaluating the influence that criminal organisations can achieve in electoral arenas. As a result, the report provides a general assessment of policy regulations, legal countermeasures and practices adopted to prevent and combat organised crime, especially in interaction with political corruption.

The report is drawn from data collected in five European countries (Bulgaria, Croatia, Hungary, Italy, Kosovo) across the above themes, and includes two more countries for the assessment of anti-organised crime legislation and initiatives (Albania and Georgia). The methodology involves both extensive and intensive strategies of investigation. A quantitative assessment of the crime and politics nexus is based on the Organised Crime & Corruption (OCC) events database, in which events data about the link between criminal groups and political corruption have been gathered and assembled1. A qualitative assessment involves in-depth understanding of the mechanisms of corrupt exchanges, presented as single case studies conducted in the countries covered by this study, inclusive of primary and secondary sources (interviews, legal proceedings, academic and policy-oriented reports). Data collection and analyses were conducted by five institutions across Europe (EUI, CSD, BCE, IKS, PSD).