Workshop: Promotion of Policy Briefs: The links between corruption and organized crime

Workshop: Promotion of Policy Briefs: The links between corruption and organized crime

On 16 February 2015 the Macedonian Center for International Cooperation (MCIC), in collaboration with the Center for the Study of Democracy, organized in Skopje a workshop dedicated to the links between corruption and organized crime.

Ms. Emina Nuredinoskа, Head of the Department for Civil Society and Democratization at MCIC welcomed the participants and presented the activities implemented by the two CSOs. She underlined the negative impacts of corruption on the economy and the society.

Mr. Ruslan Stefanov, Director of the Economic Program at the Center for the Study of the Democracy stressed on the need of stronger civil control both on the links between corruption and organized crime, as well as on the efficiency of the government institutions that tackle these issues. He noted that due to the globalization process, corruption has turned into a complex and security problem. Weakened policy enforcement in one member state can escalate to other member states. Moreover, in the last several years an increasing varieties of crimes are observed. In that context, the issue should be dealt with in a systematic manner. The organized crime threat assessment mechanism presents a suitable instrument, which can analyse the origin and manifestations of the problem and present an early warning system. A more complex system for sharing information between the national authorities is needed to track criminals across borders, prevent VAT fraud schemes, tax evasion, etc. Mr. Stefanov also complimented MCIC for exploring as a pilot exercise this new area.

Mr. Todor Yalamov, Senior Analyst at the Economic Program of the Center for the Study of Democracy, presented two of the three policy briefs elaborated in the framework of the current initiative. He highlighted that recently the civil society has started to enter a domain previously restricted only to the secret services – the analysis of the organized crime. In Europe there are significant differences how organized crime uses corruption for its purposes, how it affects the society, and what is the public response. In most cases the petty corruption is in the focus of discussions or investigations, since it is easier to observe and prove. As of lately, however, the debate and the civil society engagement has shifted towards the grand, political corruption. Mr. Yalamov noted the most common cases of abuse of office in Bulgaria. The public procurements are among the main instruments for illegally obtaining public funds. An example presents the funding of election campaigns by private enterprises, which later receive large public procurement contracts as “payment” for their support. A second area of concern is the integrity of the judiciary. Two thirds of the population believes that judges are corrupt in Bulgaria. According to the surveys’ results, the same problem is a concern for in Macedonia. Mr. Yalamov presented the instrument for organized crime threat assessment (OCTA), first introduced by Europol. The Macedonian Ministry of Interior is currently assessing how it can adopt it in the country in order to monitor the risks of human trafficking, trafficking of drugs, stolen cars, etc. He stressed that the organized crime is a business, which adopts to the new environment and finds new methods of operation. In that respect it should be regarded and tackled as such through the OCTA mechanism and the systematic and coordinated efforts of all authorities. Another positive impact of OCTA is that instead of waiting a new type of crime to appear, the system provides a venue to foresight the next criminal activities and the possible counter-measures. Thus the organized crime threat assessment should be a regular exercise that gathers information from different sources, and brings together the institutions that usually do not cooperate with each other. It can be viewed as a process of knowledge management on the most substantive issues that need to be observed and tackled. The adoption of the mechanism will also send positive message to the public that the governments are open to public-civil society dialogue, and that the authorities themselves have integrity.

Ms. Emilija Tudzarovska-Gjorgjievska, Project Officer, Macedonian Centre for International Cooperation (MCIC) presented the third policy brief on the role of media and CSOs in investigating the links between corruption and organized crime. She stressed that unemployment and the low wages of the Macedonian citizens are considered far more pressing problems compared to corruption and organized crime. At the same time 19.8% of the survey respondents perceive that all government officials are involved in corruption, and 42.2 % believe that most are involved. Money counterfeiting, bribes, money laundering and smuggling are among the most frequently encountered organized crimes according to the Ministry of Interior. At the same time the CSOs and the media still cannot strengthen their capacity to engage in the topics and the existing control over the media distorts the public opinion. This trend is of particular concern since media has substantial influence - 28.4% of the survey respondents confirm that their opinion is formed by the media. She noted that at the same time the freedom of the media is worsening according to various analysis, including the Freedom House index on the media freedom which decreased from 5.00 in 2013 to 4.47 in 2014. She concluded that there is need of stronger regulations for ensuring media freedom, and the free access to information. The CSOs and the media need to be trained in investigation methods.

Mr. Ruslan Stefanov, Director of the Economic Program, Center for the Study of the Democracy underlined that while it is easier to exercise control at a smaller scale, in a global economy the challenge is greater and it is important to have a formal document outlining the procedures of organized crime and corruption threat assessment. In Bulgaria CSD worked closely with the Ministry of Interior on the adoption of the threat assessment methodology. Mr. Stefanov stressed that it is more important to look into the criminal transit routes than the single local markets related to organized crime. These routes create a dent and an illegal channel in the customs and border police, which can be used for other forms of illegal trafficking, such as weapons, human trafficking, etc. The media should start asking questions about the efficiency of the authorities in countering organized crime. The civil society and the media should also investigate what is happening at the high political level. Mr. Stefanov noted a typical trend for Eastern Europe - the influence of the organized crime over the judiciary. This is not the case in Western Europe, where, even in Italy, the judiciary and the prosecutors were able to provide the final control on corruption.

During the discussion Mr. Borjan Gjuzelov, Expert at the Macedonian Centre for International Cooperation (MCIC) noted that there is a vicious circle formed by the biased media which shows only one side of the story. The controlled media generates passive civil society that does not recognize the corruption and organized crime as important problems. This is confirmed by the perceptions of the respondents in the survey, according to which the corruption is the fifth most pressing problem, while in other countries it takes first or second place. 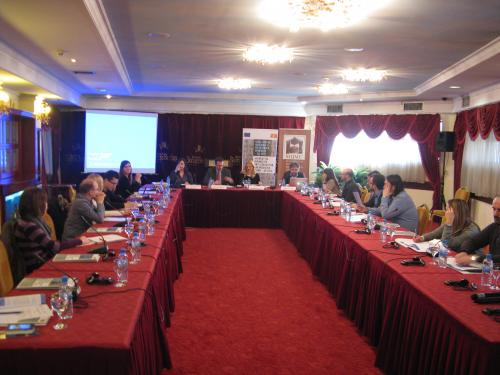 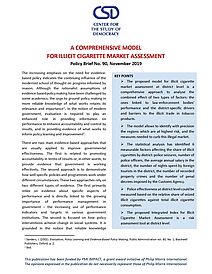