In April and July 2013, the Center for the Study of Democracy hosted two workshops, aimed at increasing the capacity of civil society in Romania to work on anti-corruption policies. The workshops were attended by a working group of practitioners from the Romanian Anti-Corruption General Directorate at the Ministry of Internal Affairs, good governance experts from the Dutch Saxion University, as well as representatives of six Romanian NGOs and think tanks working on anti-corruption and public transparency: the Institute for Public Policy, Center for Independent Journalism, Freedom House Romania, Expert Forum, Pro Democracy Association, and the Association for Implementing Democracy. The workshops aimed at enhancing the role of civil society in shaping integrity policies and improving the cooperation between the non-government sector and specialized anti-corruption institutions.

During the first workshop held on 15-17 April 2013, the Romanian guests met with key Bulgarian institutions focused on preventing and countering corruption. The workshop participants learned about the anti-corruption approaches of government bodies in the judiary, law enforcement and financial control sector. Obstacles and opportunities for cooperation between public actors and civil society were discussed in the plenary session.

During the second workshop on 1-3 July 2013, experts from CSD and other Bulgarian NGOs presented to the guests their experience in the field of countering corruption and discussed the role of civil society in shaping integrity policies.

During the opening session, senior experts from CSD informed about the process of implementing the Coalition 2000 initiative, the largest public private partnership against corruption in Bulgaria. Dr. Philip Gounev, Senior Analyst at CSD’s Security Program, and Ruslan Stefanov, Director of the Economic Program at CSD, explained how the role of civil society in countering corruption has evolved since the initiative was launch in 1997. Dimitar Markov, Senior Analyst at CSD’s Law Program informed the guests about the judiciary reform initiative within the Coalition 2000 process, implemented by leading NGOs in cooperation with government institutions. He highlighted the role of the Ombudsman as a mediator between civil society and public actors, and stressed that the establishment of the Ombudsman institution in Bulgaria was driven by civil society organisations.

Alexander Stoyanov, Director of Research at the CSD presented the Corruption Monitoring System, which has been used by CSD since 1998 to measure the levels of corruption in the country. He pointed to the initial resistance of government institutions and politicians to accept the results from the measurement. Mr. Stoyanov discussed the limitations of official statistics and presented a number of alternative methods for measuring corruption.

Todor Yalamov, Senior Analyst at the CSD’s Economic Program, outlined the major trends and risks of civil society development in Bulgaria. The discussion focused on the phenomenon of ‘civil society capture’ and the factors which have allowed politicians and administrators to misuse NGOs as a cover for gaining illegitimate profits. Mr. Yalamov stressed the need for more transparency among NGOs, through measures for self-regulation and internal control within the sector, as well as through an electronic registry for non-profits.

During the second day of the workshop, Nelly Koutzkova from the Bulgarian Judges Association discussed corruption within the judiciary system. Judge Koutzkova highlighted the strengths and weaknesses of the existing random case allocation system, introduced in an attempt to reduce corruption among judges.

Ivanka Ivanova, Director of the Open Society Institute’s Law Program presented the methodology of the Court Watch initiative, which aimed at increasing transparency in the judicial process through sending trained volunteers to courtrooms to monitor the observation of human and civil rights within trials. This instrument can be potentially used in anti-corruption monitoring. Ms. Ivanova stressed the need to depart from the general corruption rhetoric and focus on more specific priorities, such as independent judiciary and accountability of institutions, as brakes to corruption spill-overs.

Hristo Ivanov, Program Director of the Bulgarian Institute for Legal Initiatives (BILI) explained the different forms and manifestations of corruption in the judiciary and the media. He presented BILI’s efforts to promote transparency in the appointment and career advancement of judges and prosecutors. Within the ‘leadership appointments’ initiative, a coalition of NGOs, the Bulgarian Judges Association and journalists compiled online profiles of judicial candidates, fostering public scrutiny and greater transparency.

Mihaela Raykova, from the Bulgarian chapter of Transparency International (TI), presented the ‘Integrity Pact’ approach: a contract between TI, bidding companies and public contracting authorities in specific public tenders, in which all three parties commit to openness, transparency and integrity. Ms. Raykova provided insight into TI’s efforts to monitor selected high-profile privatization and public procurement procedures. She explained that irregularities occur in each phase of the procurement procedure, but stressed that the risks during the preparation phase are often underestimated.

Stanislav Slavov, from the Center for Economic Development (CED) highlighted the risks from corruption within municipal property management and public spending at local level. He explained that CED developed reception rooms at municipal level for signals against public procurement corruption.

Dr. Gounev concluded the workshop with a presentation on CSD’ anti-corruption efforts in the security sector. He discussed the advancements that have been made in the cooperation between Bulgarian civil society organizations and law enforcement institutions. He described how close collaboration between NGOs and government institutions would not have been possible during the previous decade. 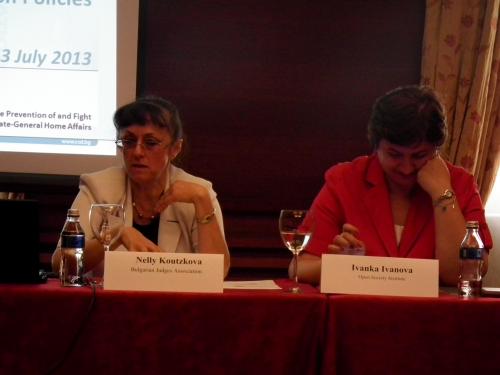 The participants in the workshop
Related